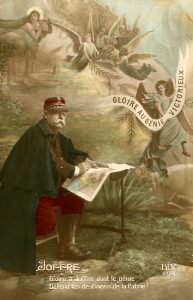 The First World War art postcards produced by the French were second to none, as this colourful work shows. It depicts French General Joffre busy making war plans with a map, but mindful of the myriads of angelic hosts that are ‘there’ to lead him on to victory. Quite dramatic, but great propaganda. The card was likely printed during 1915/16 when the great General was doing good work. He fell back in popularity and politics after the shocking defeats on the Somme in 1916 and was promoted upward & outward to Marshal of France to allow the next General (and presumably a new set of angels) have a go.

The postcard was sent from France to North Fitzroy, Melbourne with no date, nor a message. It was sent by Canadian-born Private James Laing to his Australian-born wife Ethel, no doubt with a group of letters or cards.

A quick glance of Laing’s record presents more medical files than anything else. There are two versions of his Attestation Paper, dated 7th Dec 1914 & 26th Jan 1915, and there are obvious omissions in the first set, and even a change in next of kin. All of that aside, he is best put into the category: little written, much done.

He arrived in Egypt and transferred to Gallipoli just four days after the Landing, being a much need reinforcement for the Victorian 7th Battalion. He was 30 years old and had served in the 2nd Engineers in Canada, so he was quickly promoted to Corporal, more than once, but hospital stays would see him revert to the rank of Private. He managed to dodge bullets for two months at Gallipoli, but it was ‘piles, sciatica & dental caries’ that evacuated him from the Peninsula to Lemnos then on to Malta, where he remained until March 1916. It appears that he also injured his ankle during this period.

He arrived back in Egypt at the time when the

A.I.F. was re-grouping for service on the Western Front. He was transferred to the 5th Division and spent two months in the 15th Training Battalion before heading to France. He remained with the 5th Division Base Depot until the end of 1916 then transferred to the 60th Battalion in the field. Less than five months later he was shot in the left leg and wound up in hospital in Rochester, UK. This is what is called a ‘Blighty’ – a wound good enough to get you out of the action and back to England for some time off.

He healed rather quickly, spent some time in Wiltshire at the Perham Downs Camp Codford, then in November 1917 it was back to the Front, rejoining the 60th Battalion at a ‘quiet’ time before the German Offensive in March. He then served out the next year with the Battalion with a short leave to England. While carrying a shot wound in the leg this must have been a difficult year.

When the guns fell silent in November 1918, James Laing was one of the first to be given a ticket home – being a 1915er. He arrived back in Melbourne to his wife Ethel in January 1919.

Our Turn for a Crack

When no guns were firing

Merry Christmas from the Sixth

More than six bob’s worth…

To learn more about the 1st A.I.F.

This is not a military or historical site about those who went away to war, it’s their story in their words – or at least those the censor would allow.

Our aim is to share the treasures we have gathered, and to encourage others to do the same, so that together we might understand just a little more about the lives, travels, mates and families of those who served between 1914 and 1919.